Deep Silver offers the Saints Row 3 remaster, released in 2011 and ready to return to our screens with (almost) all the DLCs and various technical improvements.

Almost nine years after its debut in the last generation, the Deep Silver Volition team is preparing to bring one of its most important titles to the shelves. Far from being just a sequel, Saints Row The Third represented a crucial turning point for the series, which before then seemed doomed to be simply the casinist (and far less brilliant) cousin of Grand Theft Auto. Although parallels with the famous Rockstar series remain unavoidable, with this third chapter the Saints of Stillwater have managed to find their way and emancipate themselves with a defined and fiercely over the top style.

Let’s see if the restoration process has given the desired results, making the product enjoyable even for the public of the current gaming generation.

After conquering the crime scene in Stillwater, the Third Street Saints, whose fame is now international, decide to embark on an epic bank robbery by assaulting the tallest skyscraper in the city. After a daring clash with the police, which ends with the capture of the protagonist, of the mythical Shaudi and Johnny Gat, our heroes are saved from jail by a mysterious benefactor who pays their bail. Conducted on the latter’s opulent private jet, our darlings learn that the Savior of the Saints is none other than Philippe Loren, head of a powerful criminal consortium called Syndicate.

Moved by anything but charitable intent, the Belgian offers them an absurd offer, of those that can only be taken into consideration with a gun aimed at their brains: to give ninety percent of all the gang’s criminal proceeds to the union. As the protagonist, it doesn’t take long to turn the situation around and fill the jet with a storm of bullets and blood, finally managing to save us and land in the filthy suburbs of the metropolis of Steelport, the heart of the activities of our new sworn enemies. Wounded but not defeated, the Saints cross the city with one goal in mind: to massacre that unpleasant of a Belgian and to climb to the sound of steelport’s criminal hierarchy with bullets.

As it’s easy to guess, the plot of Saints Row: The Third is a concentrate of the typical excesses of “best” action b-movie: if with the first two chapters the saga had tried to keep within the confines of the satire, without abandoning itself to too brazen exaggerations, the third act marked a decidedly spot change of pace, which it delivered a story proudly over the top, devoid of any semblance of mildness. Perfectly consistent with its open world setting, built like a large underworld playground, the narrative fabric of the third iteration of Saints Row is in effect a pretext to throw the player in violent and borderline situations, a perfect stage to sip a cocktail based on bloody brutality and crazy comedy. Setting innocent pedestrians on fire for Professor Genki’s sadistic pleasure, chasing clones full of steroids and resentment, or even torturing criminals from dubious morality with the legendary Penetrator (an undoubtedly lethal phallic tool): all activities that will become an integral part of Steelport of your picturesque everyday life.

A playground for our crazy adventures

In addition to the main missions, which are intended to carry on the history of the Third Street Saints, the metropolis offers a significant amount of secondary objectives that will allow us to replenish our nest egg, extend the criminal influence of the gang and unlock new vehicles, weapons and clothing. Perfectly coherent with the comic vein of production, these tasks contribute to the overall variety of experience and guarantee some pleasant diversion from revenge against Syndicate. 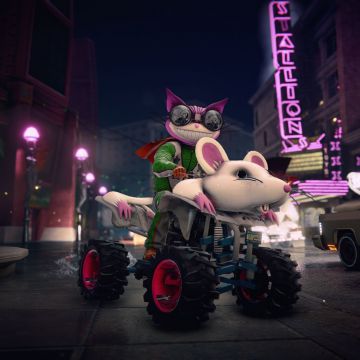 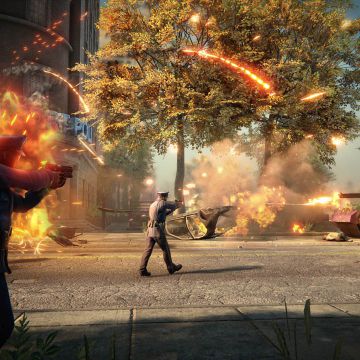 In addition to the classics pimp, killer or car thief activities, we can command a giant ball of wool to bring destruction to the streets, or participate in a bloody game of massacre in which it is ethical to kill anything that moves except a handful of poor pandas. Each of these eccentric missions will have different variations of increasing difficulty, capable of offering a good challenge to the obsessions of completism. As good entrepreneurs, we will also have the opportunity to purchase the various properties scattered around the city, which will give us a very useful periodic income in the long term. Every activity that we decide to carry out will contribute to increase our degree of respect, an element of progression through which we will unlock new skills or increase our statistics, provided that we also pay a dollar price.

These perks range from lifetime bonuses and stamina, to enhancements for our gang of criminals. Firearms and melee weapons will also be, as can be guessed, a fundamental tool to make our way between rival gangs and overzealous policemen: albeit not extraordinarily large, the Saints’ arsenal includes a good number of mouths, and during the missions we will have the opportunity to take possession of powerful temporary weapons such as gatling or powerful two-handed swords. Also in this respect, Saints Row: Third will not skimp on his demented humor giving us bizarre weapons such as the aforementioned Penetrator or a sober woodcutter chainsaw.

Coop mode and Gross mode In Saints Row The Third we will have the opportunity to play in co-op with a friend of ours, with whom we will be able to carry out the normal missions of history and to freely roam the city by carrying out heinous vandalism. The Gross Mode (Whored in English) is basically a “horde mode” that includes a good number of different maps, in which we will have to face the classic waves of enemies by changing our paraphernalia from time to time.)

Almost every weapon has a simple enhancement system divided into levels that we can unlock with the proceeds of our crimes, improving both the effectiveness and – in most cases – the aesthetics of our tools of the trade. the complementary advance which requires, in addition to the usual money, to reach a certain amount of Respect: in this case the range of benefits ranges from an increase in transportable ammunition to the possibility of simultaneously holding two weapons of the same type. Although the shooting dynamics are not particularly refined, their contribution to the playful mix seems perfectly in line with a title that makes chaos and excesses its pillars.

As in the best genre tradition, Steelport will satisfy our thieves appetites with a rich assortment of vehicles ready to be “borrowed”. If the common cars used by citizenship seem too anonymous, once we have stolen them we can easily change them in one of the many Rim Jobs in the city, choosing exaggerated colors or improving their performance.

Obviously, in perfect harmony with the sobriety that distinguishes the title, we will have available even of the not quite ordinary four wheels, such as a carriage which, during one of the most exhilarating scenes in the countryside, we will find ourselves towing. Pad in hand, the control of the various vehicles seemed quite convincing, although the arcade driving model does not reach the levels of that – still excellent – of GTA. However, let’s talk about an aspect that, in the playful economy of Saints Row, becomes quite negligible, given the almost total absence of pursuit-based missions.

In Saints Row: the Third we will also have the option of completely customize our avatar. Despite the years behind the production, the editor is still quite articulate and efficient today, with many options that will allow us to modify every aspect of the alter ego, from features to muscular power, obviously passing through the dimensions of our sexual endowments. During our stay in Steeport, we can then further alter our look with tattoos and clothes of all kinds, and resort to some surgical retouching if the appearance of the protagonist does not fully convince us.

The “restructuring” work carried out by Deep Silver Volition delivers a valuable remaster to the players’ hands, complete with all the contents published after the launch of the title except for the Bloodsucker and Unlockable Pack, as anticipated in our preview of Saints Row The Third. Also, surprisingly, it was added the ability to disable the screen FPS lock, which are normally set at 30 (generally solid): an option that, as can be guessed, generates some rather evident fluctuations in the frame rate, compared to advantages that are not particularly consistent on the playful front.

Going deeper into the technical side, the new engine used for the game offers a significantly more complex lighting system than the original one, which makes the city profile of Steelport much more pleasant and suggestive, so as to enhance any game situation, with the complicity of more advanced and impactful reflex management. The combination of (significantly improved) depth of field and motion blur makes the views of the metropolis more enveloping, offering a succession of impressive views, especially if we consider the old-gen roots of the title. This with the contribution of a good HDR, perhaps sometimes a little exaggerated in the colours but still consistent with the caricatured piece style of the game. Another significant step forward is represented by the greater number of vehicles and pedestrians on the screen, which make the city richer and more vibrant with life.

The revision work carried out on polygonal models is also convincing (especially the main characters), although the increase in geometry does not completely hide the age of production. The same goes basically for every aspect of the offer, from vehicle models to environmental details, which show completely redone assets (textures, shaders, additional layers, etc.) and greater general variety.

Some occasional bugs remain, some interpenetration of too much, but it is all in all physiological stumbles in a title of this size and, above all, with almost a decade on the shoulders. The care and attention dedicated by the team to this remaster therefore leave little doubt about the final quality of a product that, while not reaching the highest standards of the current generation, is perfectly enjoyable even for all those who are thinking of venturing through the streets of Steelport for the first time. 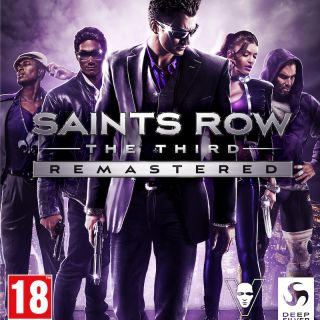 Analyzed Version PlayStation 4 ProDespite the years that it has brought, Saints Rows: The Third does not look bad at all in the current gaming market. The updating work on the technical side is the spokesman for the team’s commitment, determined to propose an offer that lives up to the fame of the title. On the other hand, Saints Rows: The Third has valiantly carved out its niche in the open world market in spite of its many affinities – at least conceptual – with an unreachable giant like Grand Theft Auto. So if you are looking for a more over the top experience than the usual criminal free-roaming, the remastered version of Saints Rows: The Third will offer you a minimum of 18 hours to complete the main story and at least triple to complete your absolute conquest of Steelport. All in the mesh of a campaign full of humour and situations at the edge of the absurd.