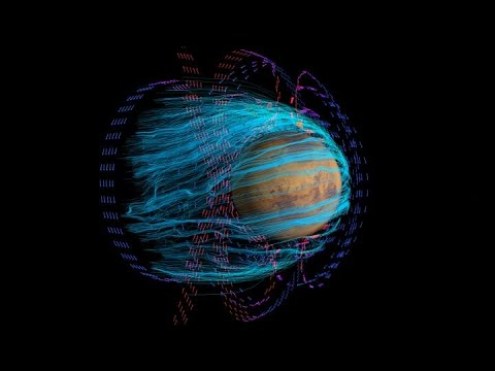 Unlike Earth, Mars does not have a global magnetic field that protects it from solar radiation but has points of local magnetism. Some researchers have been unable to get one detailed map currents that cause this particular form of the magnetic field.

This has provided scientists with a great understanding of how Mars has lost much of its atmosphere over millions of years, thanks to the interaction between the solar wind and the magnetosphere of the red planet.

The team of researchers took advantage of the data collected by MAVEN (Mars Atmosphere and Volatile Evolution), a satellite that produced extraordinary images of the magnetic field, making visible energy flows previously invisible. Here you will find the 10 most important discoveries of the probe.

“These currents play a vital role in the loss of atmosphere that has turned Mars into an inhospitable desert, ” said scientist Robin Ramstad of the University of Colorado. “We are working to determine the precise amount of energy that is subtracted from the solar wind and that allows the atmosphere to move away.”

The team analyzed 5 years of data obtained from MAVEN to obtain their map, which shows how electric currents create structures with two loops around Mars. These currents interact with the solar wind and trap it around the planet.

Researchers are interested in the mechanism that allows energy to be transferred between the atmosphere, the magnetosphere and the solar wind. Waiting for the Perseverance rover, however, we can enjoy the photos of the magnetic field but, beyond the splendid images, the map has allowed us to study better the history of Mars and to understand how it has become the iconic dessert that we all know.