WhatsApp MODs: Extras that can end up banned

WhatsApp is the most famous and used instant messaging application in the world, and it is common for you...
Read more

The best free themes for MIUI 12

MIUI 12 He is already travelling the world onboard different phones in what is, of course, his first round...
Read more

How to get Google Discover news on Xiaomi mobiles with MIUI

Do you want to have easy access to Google news from your Xiaomi, the so-called Discover? In the event...
Read more

Ally left St Johnstone in December after six-and-a-half years at the club. The 22-year-old central defender made his first start for the Saints in last season’s Europa League tie against Lithuanian side FK Trakai. Ally had developed in loan spells in Scotland’s lower leagues, firstly with Elgin City and then with Peterhead, helping the latter to the League One Playoffs and playing against Rangers at Hampden Park in the 2016 Challenge Cup final.

“I’m absolutely buzzing to join Rovers. It’s been in the pipeline for a few weeks now and I’m just happy to get over the line. I was previously supposed to get something sorted on loan, I was training here last summer for a few days. I met the lads and the staff and it’s a great set up. The club managed to get back in contact with me about a permanent deal. I just jumped at the chance and couldn’t turn it down.

Graham Cummins (a St Johnstone teammate) has gone back to play for his home team (Cork) as well so hopefully I get to play against him next season. I got along really well with Alan Mannus (ex-Hoops goalkeeper) and he spoke really highly of the club. He only told me good things, that everyone is very welcoming and it’s a great standard. You obviously see a lot of league of Ireland players getting moves to England which shows the standard of the league over here is very good. It’s a big club and I’m really excited about all the games coming up.

I was at St Johnstone for a while and I developed a lot. I had good coaches around me, Callum Davidson taught me a lot and passed on a lot of experience to me as an ex-defender. But I wasn’t getting much game time. I definitely need a fresh start. It was a great experience to play in the Europa League games but it was just a shame I couldn’t play more. It’ll be quite a personal achievement to play in Europe two years in a row, hopefully it comes about that way.

On my loan spells I scored a few goals so I do like a front post running header! I was a few years younger, there were a lot of older, more experienced players in those leagues. It taught me a lot in that sense, how to play against bigger, stronger and more experienced players. It was definitely beneficial for me. Playing in front of a crowd like that in a cup final (against Rangers) at Hampden Park was probably the highlight for me, regardless of the result.” 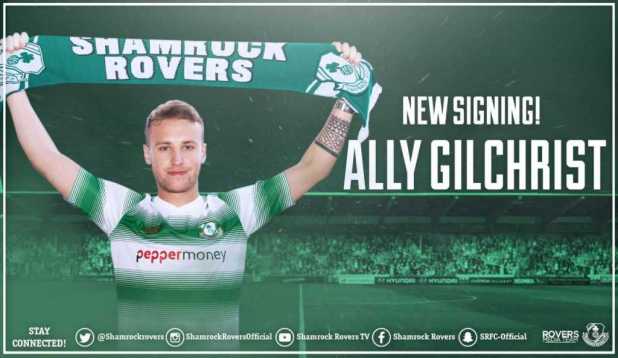 “We had Ally over in the summer, he spent the week with us training and we were hoping to get him in then on loan. It didn’t quite come off at the time but I kept in contact with Tommy Wright at St Johnstone since then and I’ve been over and watched one or two games over there. Four or five weeks ago Tommy came and we spoke about a possible deal and we were delighted when we knew we could get something done with Ally.

There’s no doubt that the time he had outside of St Johnstone as well has helped him come on in terms of the games he’s played. You can tell he’s been a professional for a number of years because of the way he trains, the way he carries himself and the shape he’s in. For us it was a no brainer to get him in.  He’s a very good defender, quick and strong.

He’s left-footed and can play a bit as well. He’s a good age for us and fits in well with what we’re doing. I believe he adds a lot of quality to the team and the squad. If you look at us, we’re a big side all over the pitch now. You have to defend a lot of set pieces and you get a lot for you as well so it’s a big part of this league. Ally is a big lad and he adds to what we have in the squad in terms of physicality.

There was a lot of chop and change here last year and the reason was is because it wouldn’t happen again. We’re very happy with what we have as a squad and there will be one or two more coming in that will add more quality to it. There’s no panic. Supposedly we’ve been after every player in Ireland and missed out! We’ve been looking in the UK and Scandinavia, not just in the last few weeks but for a long time. You’re always looking.”

Twitch, the new Sport category arrives: will it also broadcast Serie A?

Amazon continues to focus on sporting events, as demonstrated by the new "Sports" category that has been added to its Twitch streaming service. Users...
Read more

Where to see Juventus – Lazio Serie A on TV and streaming

A few hours from Rome - Inter last night, ended with a 2-2 that served practically no one, tonight ends the 34th day of...
Read more

Gaelic Athletic Association commercial director Peter McKenna said it was unfortunate to play the All - Ireland Championship games without an oireachtas this year. The...
Read more

During the interview with Corriere Della Sera, the CEO of Sky not only confirmed the arrival of Disney + on Sky Go but he...
Read more

The League chooses the soft line with Sky: the last Serie A games are not at risk

As widely expected, the sentence of the judge who gave reason to Sky, by ordering the payment of the last instalment of the TV...
Read more